"Shimane Prefecture is the setting for many of Japan’s earliest myths, and its landscape retains the scenic beauty that inspired those ancient stories. Around 78 percent of the prefecture is forest, and much of the remaining area comprises Lake Shinji and Lake Nakaumi. The wetlands surrounding these lakes act as crucial habitats for some 50,000 migratory waterfowl, and in 2005, roughly 8,000 hectares around Lake Shinji and 9,200 around Lake Nakaumi were designated protected sites under the Ramsar Convention, an international treaty for wetland conservation.
Northern Shimane lies along the Sea of Japan, where rough winds and waves have carved an intricate coastal profile. Particularly along the Shimane Peninsula, sea caves, grottos, and islets weathered into dramatic shapes dot the shoreline. Along the Koizu Coast, fossil-studded cliffs and a coastal bench of eroded turbidite reveal part of a sea floor that formed 15 million years ago.
Most of Shimane Prefecture is hilly or mountainous, with river-carved canyons and steep, rocky ravines. Two of these, Tachikue Gorge and Oni no Shitaburui, were named National Natural Monuments in 1927 and designated as prefectural nature parks in 1964. Tachikue Gorge, formed by the Kando River, is a 2-kilometer stretch of towering andesite cliffs ranging from 100 to 200 meters tall. Oni no Shitaburui is a 3-kilometer ravine whose riverbed is filled with massive boulders that create plunging rapids." 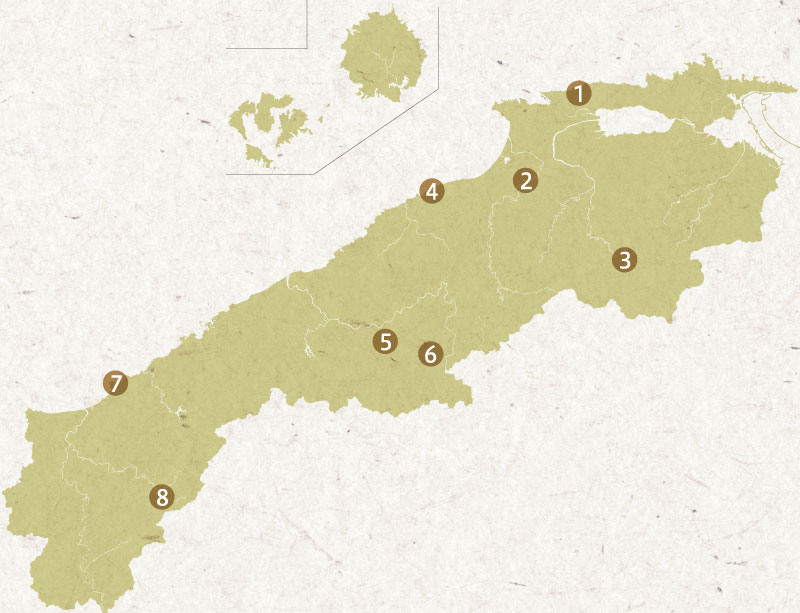 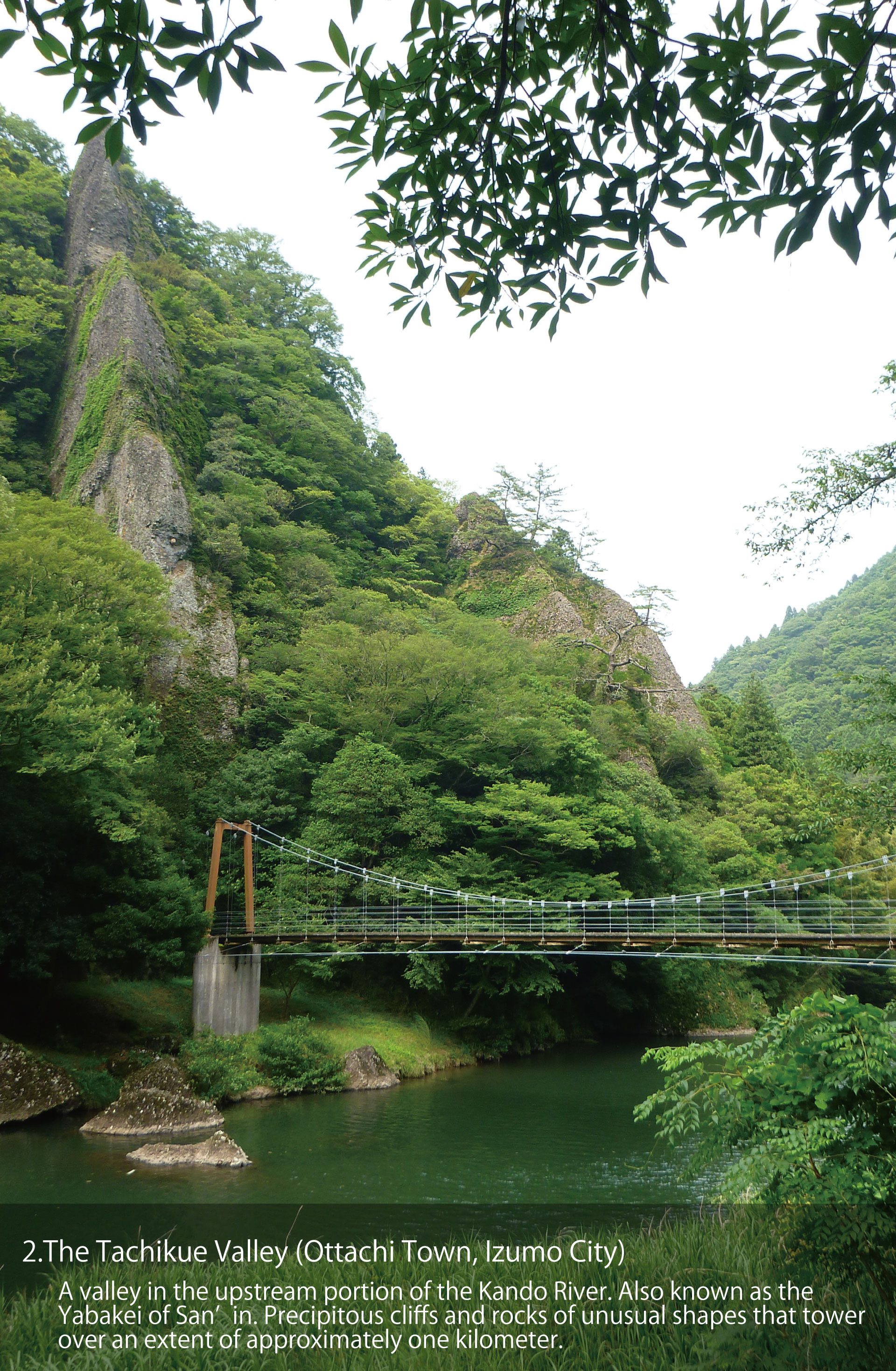 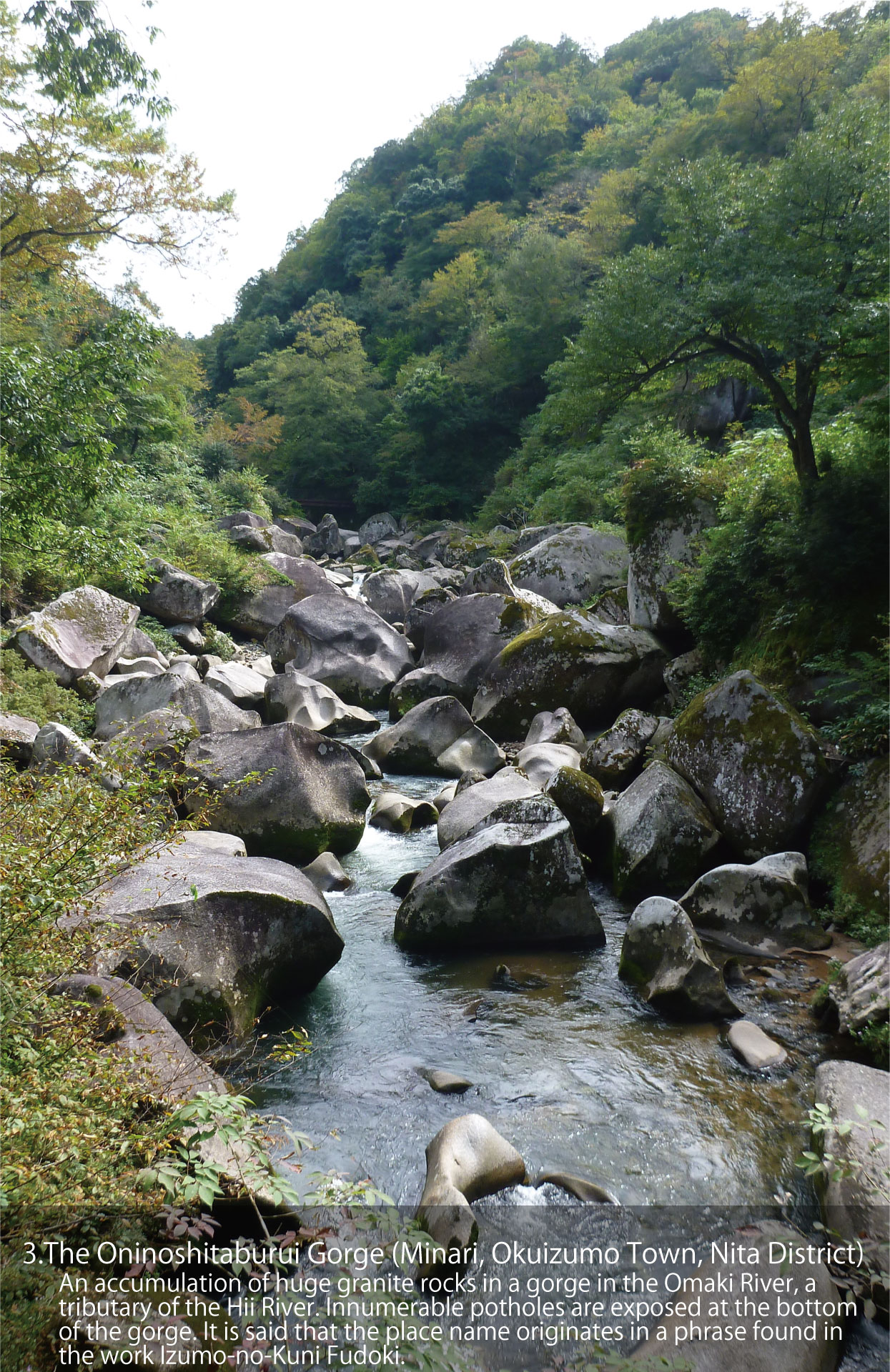 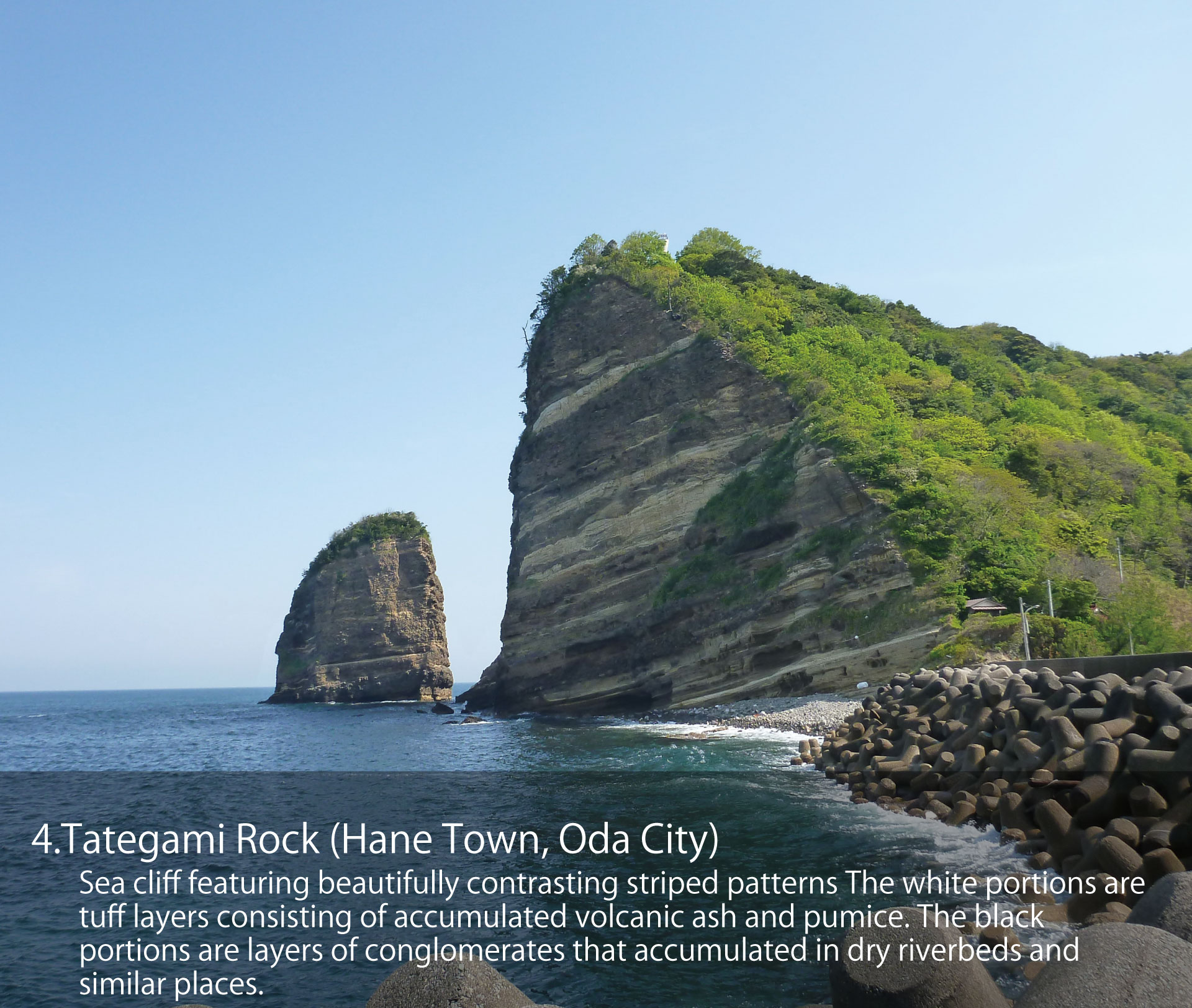 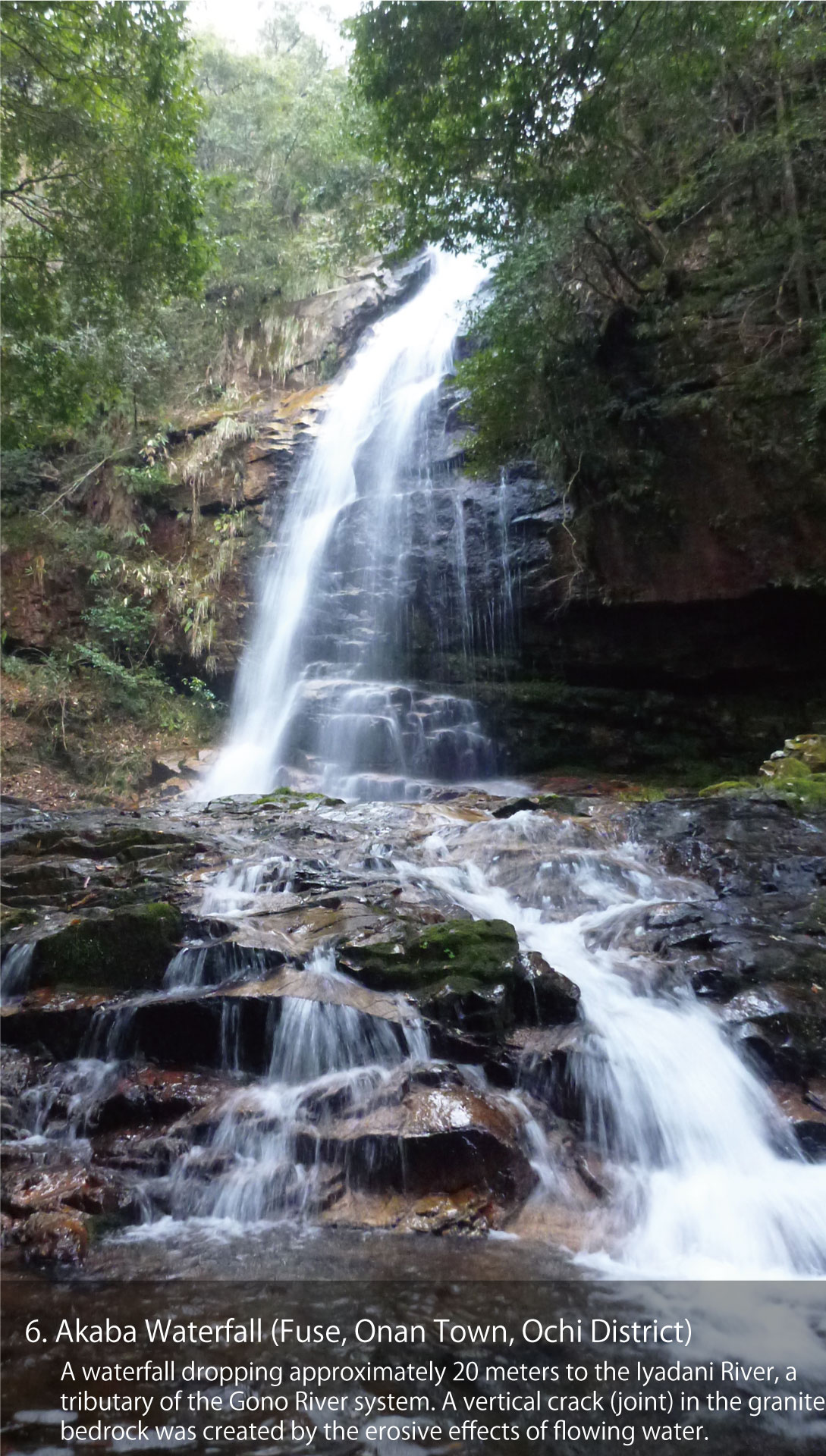 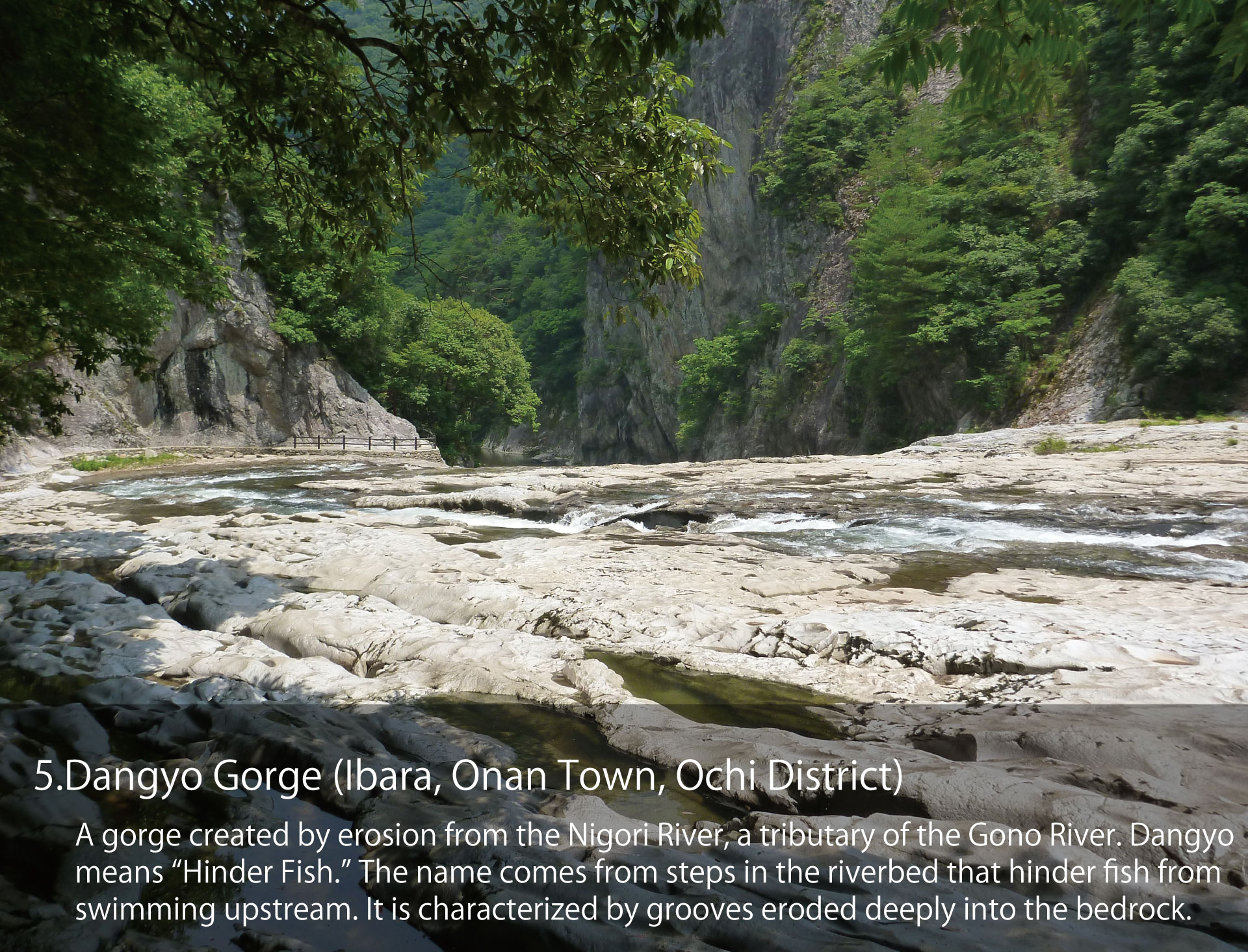 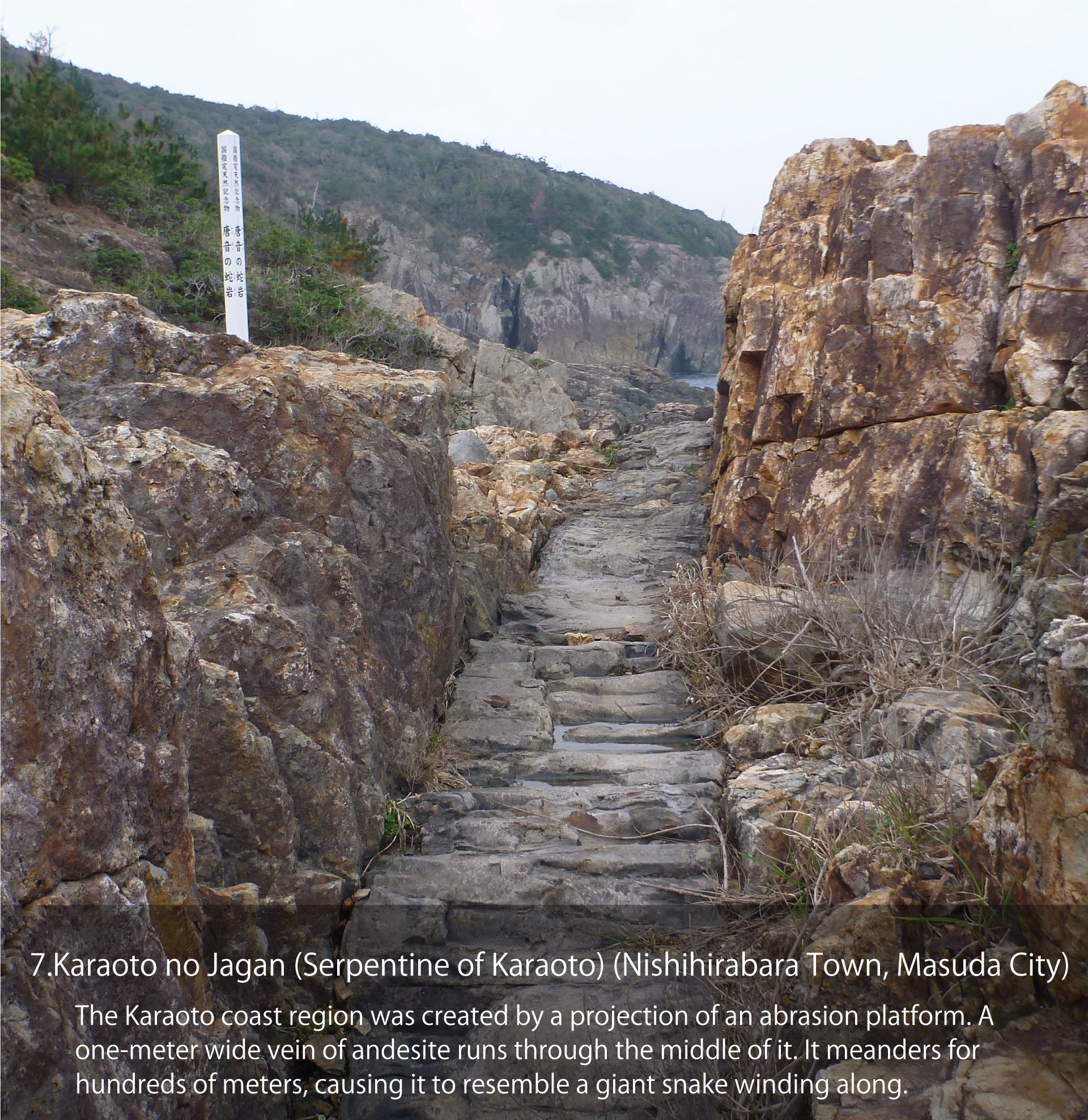 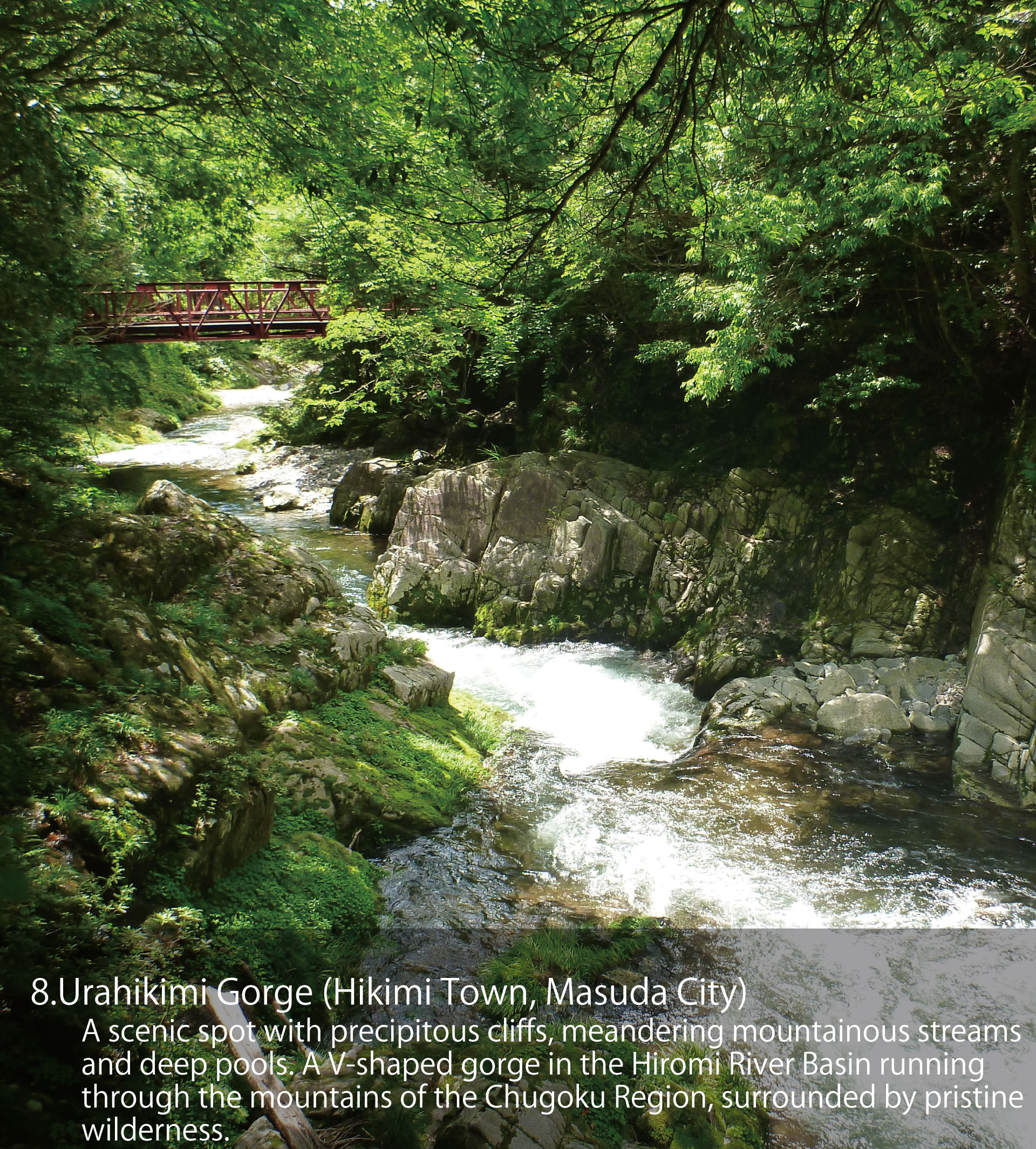 01_The Washboard of Koizu Coast (Koizu Town, Izumo City)
Alternating layers of sandstone and mudstone that accumulated in the deep-sea floor about 15 million years ago Uneven, wave-cut benches are sloping strata formed by wave erosion.

02_The Tachikue Valley (Ottachi Town, Izumo City)
A valley in the upstream portion of the Kando River. Also known as the Yabakei of San’in. Precipitous cliffs and rocks of unusual shapes that tower over an extent of approximately one kilometer.

03_The Oninoshitaburui Gorge (Minari, Okuizumo Town, Nita District)
An accumulation of huge granite rocks in a gorge in the Omaki River, a tributary of the Hii River. Innumerable potholes are exposed at the bottom of the gorge. It is said that the place name originates in a phrase found in the work Izumo-no-Kuni Fudoki.

05_Dangyo Gorge (Ibara, Onan Town, Ochi District)
A gorge created by erosion from the Nigori River, a tributary of the Gono River. Dangyo means “Hinder Fish.” The name comes from steps in the riverbed that hinder fish from swimming upstream. It is characterized by grooves eroded deeply into the bedrock.

06_Akaba Waterfall (Fuse, Onan Town, Ochi District)
A waterfall dropping approximately 20 meters to the Iyadani River, a tributary of the Gono River system. A vertical crack (joint) in the granite bedrock was created by the erosive effects of flowing water.

07_Karaoto no Jagan (Serpentine of Karaoto) (Nishihirabara Town, Masuda City)
The Karaoto coast region was created by a projection of an abrasion platform. A one-meter wide vein of andesite runs through the middle of it. It meanders for hundreds of meters, causing it to resemble a giant snake winding along.